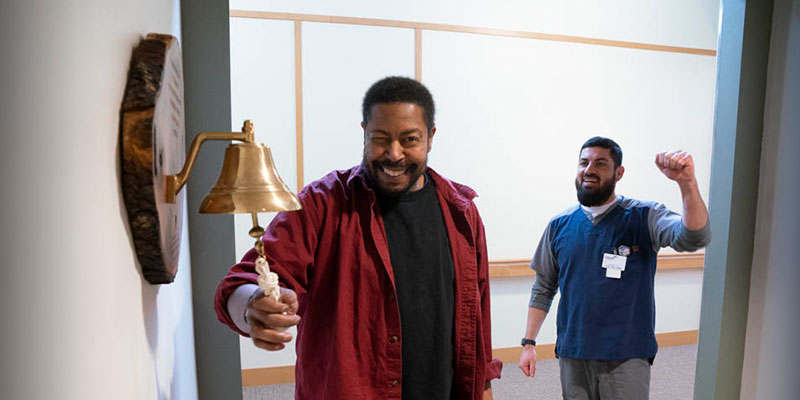 Do You Have A Story?

Are you a patient of UW Cancer Center Johnson Creek or is a loved one? Whether it is a caregiver who made a difference in a time of need, a staff member who went above and beyond or the story of how your care changed your life, we'd like to hear from you. Share your story and help others

He and his wife Lisa have two school-aged children and raise bees, vegetables and animals on a small farm near Watertown. Fields owns Fields Accounting and Tax Services LLC in Jefferson, and tax season is always super busy.

So when he started feeling tired during the spring of 2018, it may not have been a surprise. He had been working long hours in his young business, which he started after a career working for the Internal Revenue Service as an IRS agent supervisor.

He was really surprised to hear from his doctor in Watertown that he had developed diffuse large B-cell lymphoma.

"I was 44, I was running in 5Ks, raising bees and eating organic," he says. "I can't even remember the last time I ate something that I didn't know where it was raised."

Clayton began blogging and sharing his experience on Facebook, in part because he says that there's a misperception that African-Americans don't get cancer.

"I put it out there, and started hearing from people that yes, they had it, too," he says.

As busy as he is, Fields appreciated being able to have his chemotherapy closer to home in Johnson Creek. He's awaiting one more test before his physician, Dr. Jessica Shuster, declares him officially in remission.

"I think we're really lucky to have this place, the care here is really good," he says. "I had a really good cancer experience. The only way it could have been better is not to have had cancer at all."

Since being diagnosed with rectal cancer in summer 2018, Earle Young, of Whitewater, has developed a new language about the experience.

He doesn't come to the Johnson Creek Cancer Center for chemotherapy, he comes for "the elixir of life." And those radiation treatments? He calls those "the rays of lightness," which he receives while lounging on his "tanning bed."

"Cancer has made me vanquish negativity from my life and look for the joy," he says. "Letting joy into your life changes everything."

Even during the roughest days of chemotherapy, Young appreciated the wooded views from the cancer center and the chocolate chip cookies.

Young, an avid bicyclist and bike repairman, has found the ideal volunteer spot after retiring from UW-Whitewater: He's the mechanic for the university's famous wheelchair basketball game.

"Spoked wheels are spoked wheels, and fixing them is the same," he says. "And world-class athletes in wheelchair basketball are not that different from world-class bike racers."

Young asks his friends to send him healing thoughts. It could be the wheelchair athletes dedicating a game effort to him, or his pals in the Skip Castro Band ripping off a rousing version of "My Gal is Red Hot" or a biker friend dedicating a mountain climb to him.

"When they send it out into the cosmic universe for me, I just know," he says. "My support network has been awesome."

Bobbi Jo Brown is happy to be at the end of her treatment for stage four diffuse large B cell lymphoma.

"I rang the bell in August," she says, signifying the end of chemotherapy. "It was very satisfying to be done, and I finished my radiation treatments in November."

Brown said she had to travel to Madison because the machine at Johnson Creek Cancer Center was being upgraded during the time she needed radiation therapy. She also had an inpatient stay at University Hospital for more treatment. But she lives in Johnson Creek and appreciated being able to have her chemotherapy at home.

Even more than the location, though, she appreciated the personal care from Dr. Eastman and Jessica Shuster, and the support from the staff, when she would call in with a question about her treatment.

"The nurses here are fantastic, they're so thorough and friendly, and they never make you feel like you're asking a dumb question," she says.

Brown works for her sister at Equality Payee Services, which helps seniors and people with disabilities pay their bills by managing their social security payments. She says her sister and other co-workers donated a lot of their own medical leave to help her out during her treatments.

"Luckily during treatment, I didn't miss any work, I was able to work all through the radiation," she said. Still, she's glad to have 2018 behind her.

Brad Glassel is something of a rock star at the Johnson Creek Cancer Center.

He's the guy who came up with the idea of having a bell to mark the end of treatment for patients, and since it was installed, ringing the bell on the final day has become a cherished tradition for patients here.

A friend who is a woodworker created the polished cross-section of tree trunk that holds the bell, and Glassel had Countryside Jewelry in his hometown of Lake Mills inscribe it. It reads: "I ring this bell to celebrate! My treatment is done. Cancer does not define me and I'm already moving on."

Glassel's cancer journey began when he was diagnosed with stage 3 prostate cancer on St. Patrick's Day of 2016. He had brachytherapy with Dr. Greg Cooley in Madison, and had his external beam radiation therapy with Dr. Jessica Schuster in Johnson Creek.

"Because I live in Lake Mills, it was definitely easier for me to come here," he says.

He also appreciates that Gilda's Club has a monthly meeting at Johnson Creek, saying he benefited a lot from that group and from Epic Experience, a group that offers free wilderness experiences to adults diagnosed with cancer.

Glassel still works full time for American Family Insurance Co. but manages to find time to volunteer through Gilda's Club and as a volunteer driver for the American Cancer Society, taking other patients to their appointments. His desire to help others put cancer behind them can be heard throughout the center.

"Every time I hear the finish bell ring," says Dr. Schuster, "it reminds me of just how much of an accomplishment it is to complete treatment, and the role we all play in helping patients get there."